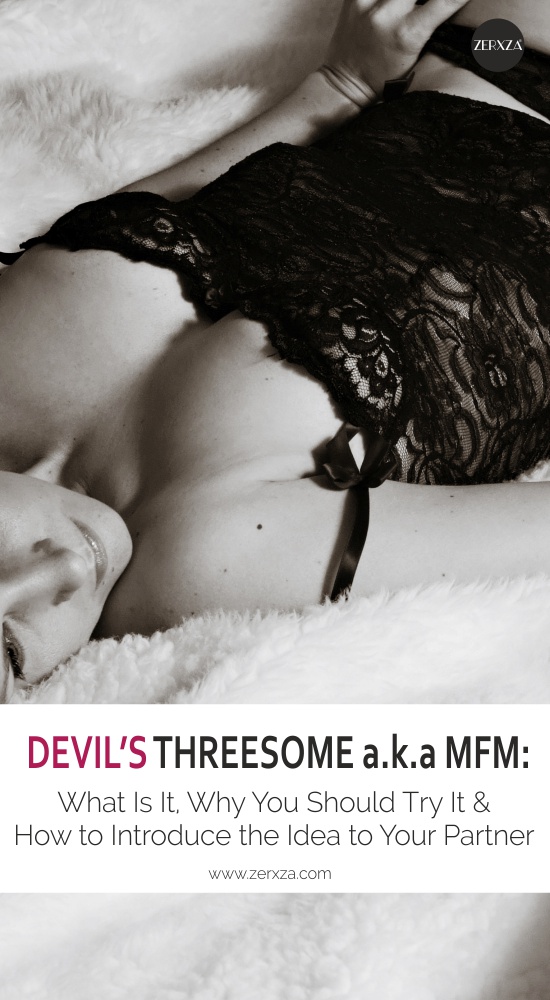 This strong stigma and double standards are starting to fade though and both men and women are finding MFM to be an exciting way to spice up their sex life in a very unique intriguing way.

While many people didn’t know much about the term before Kavanaugh’s controversial yearbook entry, the term is speculated to originate from religious myths. It’s said that the devil had a forked member, so when pleasing a woman, the devil penetrated the woman’s vagina and anus at the same time, exactly as would happen in three-way intercourse with two men being involved.

Though there might be alternative explanations to the terms’ actual origins, that one seems to be the most common one, explaining the essence of this interesting act.

How to Be a Great Lover: Girlfriend-to-Girlfriend Totally Explicit Techniques That Will Blow His Mind
Lou Paget - Harmony - Kindle Edition
Sale
Come as You Are: The Surprising New Science That Will Transform Your Sex Life
Emily Nagoski - Simon & Schuster Audio - Audible Audiobook
- $1.72 $20.95
The Guide to Great Sex: Tips and Techniques to Get Better in Bed & Take Your Sex Life to the Next Level
Michael Karp - Kindle Edition

MORE FROM ZERXZA:  Kindness Over Looks? New Research Uncovers What People Actually Look for in a Partner

Men, however, are not such big fans of the idea and see the idea of MFM as a definite deal-breaker in the relationship, even to the point of breaking up.

For some, the major issue arises from the female partner’s wish to include a third party to the mix which might indicate dissatisfaction with the relationship. For others, the thought of sharing intimacy with another male is daunting and extremely unappealing.

People are different though and there are some men who have claimed the experience having been arousing instead. Franklin Veaux, the co-author of “More Than Two: A Practical Guide to Ethical Polyamory” said: “It’s a powerful experience to see your lover in ecstasy, and working together with someone else to bring that about is…well, awesome.”

Many men have shared that opinion, saying it’s actually satisfying for them to see their partner being so aroused and that was the case even when both male participants were straight.

The bottom line: what works for some, might not work for others and vice versa. While the idea of MFM intercourse might be appealing to some men, others might be stunned of the outlook of sharing bedroom joys with another guy or they might be even distressed of the idea.

How to introduce the idea of MFM to your partner

If you’re in a long-term relationship, trying MFM with your partner might be an interesting way to spice up the relationship, but it’s clearly not a subject that’s easy to bring up since many guys might not be too keen on trying it.

So what’s there to do? Here are a few things to keep in mind.

Pleasing you is the goal! If he understands the expectations, the idea might be easier for him to handle.

MFM can be an exciting and arousing experience for guys as well, even if at the first look it doesn’t seem that way.

MORE FROM ZERXZA:  The Curious Issue of Stalking: Why Some Do It and How to Break Free from Stalkers

However, it’s worth to explain to your partner that MFM can be enjoyable for him too!

How to Be a Great Lover: Girlfriend-to-Girlfriend Totally Explicit Techniques That Will Blow His Mind
Lou Paget - Harmony - Kindle Edition
Sale
Come as You Are: The Surprising New Science That Will Transform Your Sex Life
Emily Nagoski - Simon & Schuster Audio - Audible Audiobook
- $1.72 $20.95
The Guide to Great Sex: Tips and Techniques to Get Better in Bed & Take Your Sex Life to the Next Level
Michael Karp - Kindle Edition

When you find yourself longing for some MFM action, the question you should think about is why you want to do it. Is it because you just want to mix things up? Or is it because you are, in fact, really not satisfied with your relationship? If the answer is the first option, MFM can be an interesting way to spice things up and it can definitely be enjoyable for all those involved.

Are You Raising an Overly Sheltered Child?

How to Count Calories Correctly – Cooked vs Raw Food