How to Check If Your AC Unit Needs a Repair

Is the Alkaline Diet Right for You and Can You Be Healthy with It?

Some sex toys have made their way into the mainstream. Vibrators, for example, are so normal nowadays that most people have at least one in their bedroom. Even edible toys, though usually laughed at, are considered pretty normal.

But there's one toy that rarely gets discussed. Many don't even know about it and those who know are afraid to try it. And most of the time, these toys are only seen in adult movies.

That mysterious toy is sex machine.

What exactly are sex machines?

Sex machine, as you might imagine, is a mechanical device that's made for sexual intercourse. In other words, it replaces the male partner completely by doing the “work” mechanically. It wouldn't even be too wrong to call it a sex robot.

Though most sex machines are fairly similar in their mechanics, there are plenty of varieties.

With its revolutionary design, gentle touch, and sexual aiding functionality, the Sybian has become the leader of sex machines. Today, there are tens of other saddle-type sex machines available, even via Amazon. 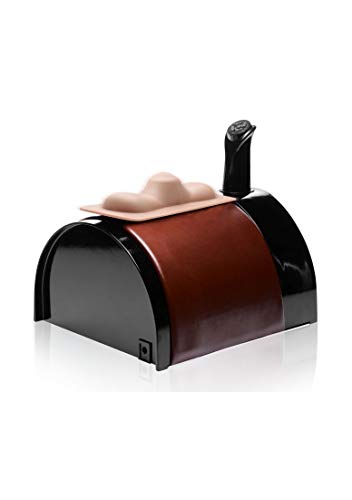 In addition to the saddle-type machines, the reciprocating sex machines are second most loved ones, offering heavier penetration and a thrusting sensation, similar to actual intercourse.

Are sex machines better than the “real thing”?

What brings pleasure to one, might not to the other. However, many agree that when it comes to sex machines, they simply do not compare to an actual real human intercourse.

As one Quora user described, sex machines don't give her any pleasure when she's alone, but it's a whole another story when her partner operates a sex toy.

But when talking mechanics, can the machine actually bring you a stronger orgasm? “Greater orgasm from a machine? Yes, and very often, but only in the nerve to brain stimulation. There is no emotion, touch, whispers… But for just the sake of an orgasm? Oh, yes!” said a Quora user when asked if sex machines could bring better orgasms.

Sex toys are often a matter of taste. Some users have found sex toys to bring some new spice into their sex life since it gives more variety. “It just makes real sex better,” explained one Quora user about her experience after having explored sex toys for a couple of years with her partner. Another user shared that enthusiasm, saying that it's a nice addition to a toy collection, providing additional options.

“I don’t think the machine is meant to compare with a real partner. Even the best self-pleasing sessions don’t compare to having real fluid, energy, and chemical exchange. The best way to use these bad boys, in my opinion, is to enhance your love life,” commented a sex expert and a sex toy review site's owner Dainis Graveris. Why should you consider getting a sex machine?

Even if the machine doesn't completely fill every role for you, it still has several great perks that are worth considering.

It helps to explore your sexuality

Sex can be a pretty stressful activity, especially if you're a novice. It doesn't matter if you're with a long-term partner or have recently started dating someone, it's easy to freak yourself out and get anxious or even ashamed.

As Hismith has said, sex machines help to experience sex in a private setting and learn how to achieve orgasms. You'll get to experience and practice speeds, positions, thrusting force, or even your sensuality. This way, sex machines are incredibly empowering tools, enabling you to reconnect yourself with your sexual side.

Orgasms are very personal and as seen from users, some might get an orgasm every single time while others need their partner to interact with the machine.

In most cases though, sex machines give an orgasm every single time due to their ability to produce up to 180-240 thrusts per minute, making them great for guaranteed pleasure.

Sex machines are especially great in case you don't have a partner yet. In addition to helping you explore your sexuality, you can enjoy a very authentic intercourse without having to worry about having a “friends with benefits”. Lack of intimacy is one of the biggest problems in every long-distance relationship. Sex machines can bring an unexpected spice to your life even if your partner is not around.

Hismith recommends recording your sex machine session for your partner or having a webcam session together. You can bet he'll never see that one coming but he'll definitely love it!

Brings some spice to you and your partner

No matter if your sex life is already hot enough or it could use some spice, sex machines bring some freshness to the bedroom by giving new options.

Sex machines can also be used for steamy games: you can have your partner blindfold you and play around. Or your partner can let his fingers work some magic while the machine provides penetration.

At first glance, sex machines are kind of scary-looking: big steel frame, a motor, and a soft attachment for penetration. Understandably, the idea of having a machine thrusting you can be a bit unsettling at first and might make you wonder if it's even safe to use a toy like that.

As long as you don't use homemade tools or don't modify the professional sex machine, no injuries should happen.

How to choose a sex machine?

While vibrators are not that hard to choose from, buying a sex machine can be a tricky business.

One mistake many first-time users might make is buying the cheapest possible model. However, as many sex-machine fans have said, this is not the time to cheap out.

“I haven't used a low-end machine but I've heard nothing but bad about the low-end systems. They break or don't have the power needed for sustained intercourse,” commented one Reddit user. “Go for quality, not appearance,” said another.

Since sex machines have a motor and many moving parts, it's especially important to always opt for a toy that's manufactured by a well-known company. And since it's not exactly something you'd want to buy every other month, investing in a quality toy will pay off greatly.

Even the cheapest sex machines aren't that low-priced. An average sex machine costs around $400-500. That's also around the price point of most Hismith sex machines which are considered one of the best among users. (Note: By using the code 7BXGPAHD, you get 5% off at Hismith)

In most cases, the price stays around $500-1000, though depending on the model, prices can go up to $1800. Brands like Love Botz usually stay within the lower price range and are often available at most adult stores, including places like Hustler Hollywood (who carries a range of sex machines).

When it comes to average machines, you still get great quality in the range of $400. Hismith ones have been especially loved by users since the machine is surprisingly quiet, comes with a powerful motor, and is completely remote-controllable via an app (which is available for both Android and iOS).

But in addition to price alone, there are plenty of other things to consider, such as:

As with most sex toys, there's a huge fog of stigma surrounding sex machines. However, if you've been wondering how to take your sex life to a new level, bring something fresh to your bedroom or just practice your moves and explore your sexuality, sex machines provide invaluable experiences. And you can be sure that no matter the case, a good sex machine will almost always guarantee your satisfaction.

5 Fashion Basics to Buy for a Man Who Hates Shopping

Body Detoxification: How to Do It the Right Way

What to Do if Your Child Catches You Having Sex

Tonight’s the night. You tucked your children into bed. You made sure they had everything they could possibly need. You shut the doors, and...