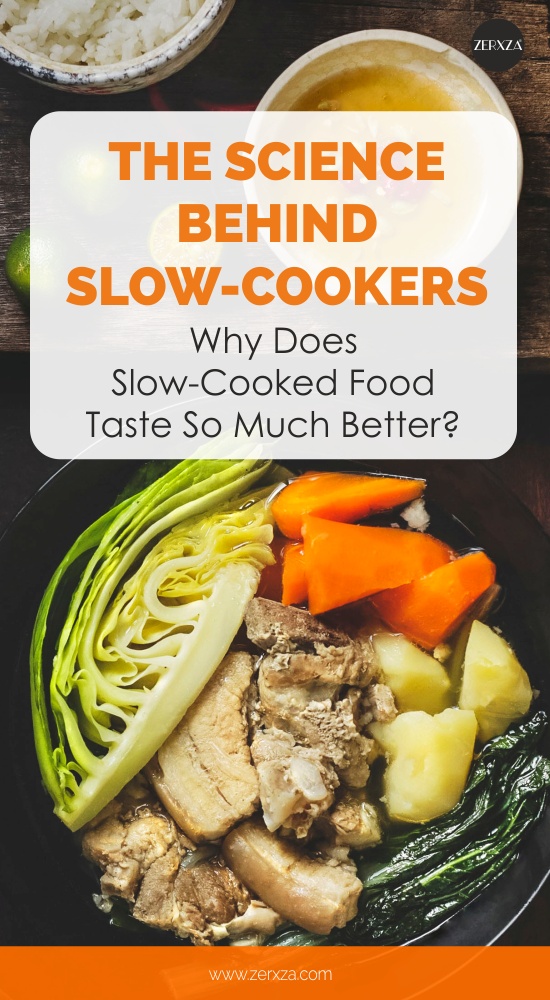 Slow cookers are all the rave right now for various reasons, starting with convenience and ending with, of course, taste.

Many slow-cooking enthusiasts have discovered one peculiar thing about food prepared that way: it develops a taste that can’t be compared to other more common cooking methods. Slow-cooked meat, for instance, tastes almost always better than any other cooked meat.

But why is that? What’s the secret behind slow-cooked food? Is it the right seasoning, using herbs and spices, picking the right piece of meat or something else?

While all of those things are important in the taste formula as well, there’s a delicate science behind slow cooking that explains why food develops a much more tender and delicate taste.

The slow-cooking method: what happens to your food at different temperatures?

Meat goes through the most significant changes at different temperatures. In addition to the temperature itself though, the length of cooking is also a crucial point, changing the way how the meat will turn out quite literally.

The main point of cooking: the collagen in the meat will start melting at around 160F, turning into gelatin which gives the meat more flavor. While cooking, the main goal is to get the collagen to melt.

Collagen is the exact reason why both the temperature and length of cooking are relevant. The process of liquifying collagen is considered to be a kinetic process that can happen thanks to both the right temperature and right duration.

So what exactly happens to the meat at different temperatures?

MORE FROM ZERXZA:  E Numbers in Your Food: Should You Avoid Them?

As the first step, enzymes called cathepsins and calpains start deactivating. This happens at around 105F to 122F and that’s when the meat starts “aging”.

At 120F, several processes happen. Due to coagulation, the meat turns pinkish in color because of the coagulated clumps in the meat. As proteins called myosin start to coagulate at this stage, the cells become firmer, creating a certain tenderness to the meat. Meat that’s prepared around this stage is also known as rare. Myosins also remove the water from their molecules which is partially the reason why rare meat seems so juicy – the water is essentially thrown out by other molecules.

A similar process occurs at later stages as well. At 140F, the red myoglobins become tan-colored which is the reason why medium-done meat becomes somewhat brownish-greyish. Since collagen also squeezes out other liquids, the meat loses its juicy nature and becomes chewier.

At 140-160F, the meat is at its chewiest due to having lost most of its juices and the collagen shrinking.

The best part starts at 160F – that’s when collagen starts melting and becoming gelatin. This stage might sound controversial since, on one side, the meat actually becomes drier due to all the lost juices. However, the collagen which starts melting at 160F turns into gelatin which makes the meat more tender. The longer the cooking duration, the more the muscle fibers start breaking apart – that’s why it’s so easy to eat slow-cooked meat which just seems to melt under your fork. It’s all due to the long process of collagen liquifying into gelatin.

So while the meat is, indeed, drier, it’s also more tender because of the gelatin. Collagen can’t turn into gelatin quickly – it’s a lengthy process, which is why slow cooking is the ideal method to achieve that perfectly tender meat.

Slow-cooking is also an essential method to have the meat “come off its bones”, in other words – break down the connective tissue in the meat.

MORE FROM ZERXZA:  Pros and Cons of Protein Powders: Things You Need to Know

Another reason why slow-cooked food might taste better is the graduality of the temperature. As Riam Chantree, a food-science enthusiast explains: “Moisture retention in meat is largely a function of temperature, so the more evenly you get the whole steak up to the desired temperature, the greater moisture you have while achieving the desired texture.”

In addition to the delicate science that happens in the food as a result of different temperatures, time influences something else: flavors mixing together.

There’s a huge difference between frying a piece of meat with herbs for a couple of minutes versus cooking meat for hours together with herbs. During cooking, flavor components start reacting in various ways, for example, combining with other flavor components and affecting the food’s taste in the end. Some flavor components might even get amplified – such as sugar which is naturally present in all food items.

The more time flavors spend together, the better and stronger the outcome.

What to do about the “slow cooker flavor”?

As great the taste of slow-cooked food can be due to various processes it goes through, some people have also reported not liking the “slow cooker flavor”.

The term “slow cooker flavor” refers to the phenomena of food tasting pretty much all the same after cooking in a slow-cooker. Often, the reason lies in having cooked all the ingredients in the slow-cooker right from the start, therefore some flavors can get lost while others are amplified. Same goes for textures – the whole food can seem like one big “mushy” substance, instead of having various textures to it.

MORE FROM ZERXZA:  More Addictive Than Cocain: Your Food Might Contain These Addictive Substances

To avoid that happening, there are some ways to give an extra “oomph” to the slow-cooked food and combat with the “slow-cooker flavor”:

The golden rule of getting both the brilliant taste of slow-cooked food and the freshness: make some extra effort near the end of the cooking time since it can have a massive effect on the final dish. This way you can enjoy the delicate science of slow-cooking without having to deal with the downsides.

Low-Histamine Diet: How to Manage Histamine Intolerance with Your Diet