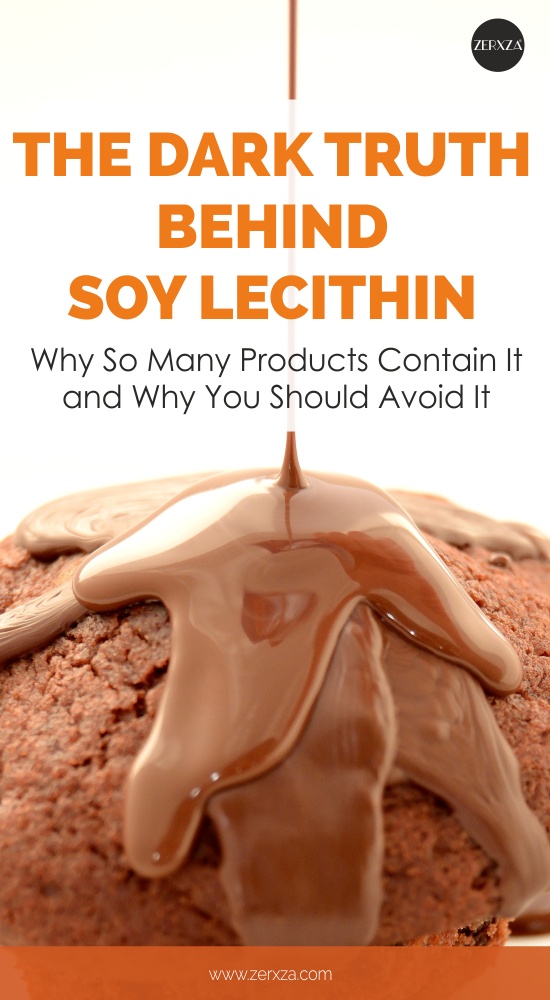 Soy lecithin. Hershey’s bar has it. Snickers has it. Reese’s peanut butter cups have it. Sometimes it looks like every single candy bar on the whole planet uses it.

Soy lecithin seems so natural and harmless, especially since most of us are used to seeing it on our food labels. After all, if almost every single treat uses it, it can’t be bad, can it?

Soy lecithin is one of the most controversial additives out there. Some experts claim it to be completely safe even for those with a soy allergy, others say it would be wise to stay away from any products that include it. So what’s the truth?

What is soy lecithin?

Lecithin (phosphatidylcholine) is a fatty substance that’s naturally present in both animal and plant tissue. Interestingly, lecithin attracts both water and fats, so it’s perfect for combining those two together. As you know, water and oil don’t mix otherwise and that’s exactly where lecithin comes into play – it helps to smoothen (emulsify) mixtures and mix water and oil together, something they’d normally never do.

Lecithin isn’t anything new either. In fact, it was first discovered in 1845 by a French chemist who extracted it from egg yolk.

To get lecithin, it must be extracted from the source chemically or mechanically – those sources are most commonly soybeans, eggs, milk, rapeseed, cottonseed, and sunflower oil. So when referring to soy lecithin, it means lecithin that has been extracted from soybeans.

The dark side of soy lecithin: questionable manufacturing and GMO crops

In theory, soy lecithin doesn’t sound that bad. Essentially, it means that a certain naturally occurring fatty substance has been extracted from soybeans.

The problem lies in the extraction process though.

To get soy lecithin, the raw soybeans are exposed to a chemical solvent like hexane to get soy oil. After that, the oil goes through degumming which means that water is mixed with the oil until lecithin separates from the oil. To get the final product, the extracted lecithin is dried and often, it undergoes bleaching using hydrogen peroxide.

MORE FROM ZERXZA:  How to Live with Lactose Intolerance

The reason why soy lecithin is largely the most common type of lecithin is simple: it’s nothing else but a byproduct that’s just derived from regular soybean oil manufacturing. Crafty manufacturers just found a way to use the leftovers and that’s how soy lecithin is made.

The main issue with soy lecithin is the vast processing and various chemicals behind it. First and foremost, hexane itself is somewhat concerning. Besides being used to extract oils, it’s also used as a solvent in glues and varnishes and even in roofing.

Most oil manufacturers claim that hexane is removed through a “multi-step process”.

“Volatile hexane is removed from the separated oil and flakes by increasing the temperature through direct or indirect contact with steam. Residual hexane is very susceptible to volatilization during heating of the oil or flakes under high vacuums and temperatures in selected processes designed to produce soyfoods or soy ingredients for human consumption with negligible hexane residual,” explained a paper by Dr. Barry G. Swanson.

As further mentioned in the paper: “It is expected that n-hexane residues in the oil component of processed foods will be further reduced during processing or preparation.” Basically, it is believed that due to the high temperatures used while preparing food, hexane will disappear completely – or at least, most of it will.

However, the real concern is the lack of regulation by the FDA. Hexane isn’t regulated by the FDA and thus, there is no real truth about how much hexane is safe. Even more, can you ever be certain about the efficiency of the hexane extraction process? The “multi-step process” described by many manufacturers still leaves a shadow of a doubt: what if too much hexane remains in soyfood?

Would you really want to consume something that contains a hint of solvent? Hexane is actually already being replaced in the textile and leather industry with other solvents due to various health dangers posed on workers like possible hexane poisoning due to inhalation. In 2010, more than 60 Chinese workers who assembled Apple products were hospitalized due to hexane.

However, it’s still widely used to process soy lecithin. As it’s not regulated, you can’t ever be certain how much hexane you are really consuming.

Some manufacturers even use hydrogen peroxide in the later stages to change the soy lecithin’s color to a more attractive light yellow.

MORE FROM ZERXZA:  What Makes Tofu so Popular?

Besides the questionable manufacturing process and chemicals used during it, the other main issue related to soy lecithin is its origin.

According to the Non-GMO Project, soybeans are the number one genetically modified crop in the world. As much as 94% of US soy crop is GMO and the numbers aren’t much different elsewhere. Similarly to other GMO crops, the main reason behind the modification is to manufacture more and more soy and battle against environmental issues that would threaten the crop. Hence, stronger GMO crop is cultivated.

Due to the extensive processing lecithin goes through, it’s impossible to differentiate whether the lecithin was derived from GM or non-GM crops. You can literally never know where the soy lecithin derives from which is, clearly, an issue for people who try to avoid GM food for different reasons, whether its to avoid antibiotic-resistant components or something else.

Soy lecithin might be highly processed but it’s still a potential threat to those with a soy allergy.

This question is controversial though. Some studies say that that the soy protein count in soy lecithin is so small that it isn’t sufficient to trigger an allergic reaction while others claim that there’s plenty of soy protein there.

After all, it’s derived from soy and even very extensive processing might not remove all of its origins.

Why is soy lecithin used in the first place?

Without diving deeper into the potential health hazards of soy itself, it’s clear that soy lecithin’s main issue is its questionable processing. It’s essentially a waste that’s being used to create smoother mixtures.

MORE FROM ZERXZA:  Paleo Diet Might Put Your Heart at Serious Risk

Besides emulsifying, soy lecithin is used to extend shelf life, reduce stickiness and fill many other tasks that are all related to one thing: creating products that last longer and are cheaper to manufacture. Soy lecithin is most commonly used in chocolate because it helps to create the velvety smooth texture we are all used to – it helps to reduce its viscosity so the chocolate bar is easier to work with.

However, the real reason behind using it is production costs.

To get that creamy beautiful texture, cocoa butter could be used instead. In fact, cocoa butter and soy lecithin have the same purpose: both of them can create a better texture.

Cocoa butter, a completely natural ingredient that would otherwise top the highly processed soy sludge, is not so widely used only due to costs. While 3-4% of extra cocoa butter is needed, just 0.5% of soy lecithin is needed for the same outcome. As of March 23, cocoa butter prices were over $7000 per tonne. Soy lecithin prices can range from anything between $300 to $1000 per tonne. So not only is soy lecithin price per tonne times and times lower, much smaller amount is needed in comparison to cocoa butter. Just a simple calculation shows a clear reason why so many manufacturers opt for the lecithin: it enables them to get the same outcome while maintaining their profit margins.

Soy lecithin is not used in the chocolate bar to give it better taste or make it better for you as a consumer. The only reason is to make the manufacturer’s life easier and cheaper.

So should you avoid soy lecithin? The truth is, it’s up to you. Soy lecithin is a clever substance which seems completely harmless, but underneath poses several concerns and doubts. Various studies claim it to be rather safe, especially since it’s used in such a small quantity. However, it’s so common that you might be consuming far more of soy lecithin than you imagined.

The bottom line is: do you want to consume a questionable and highly processed byproduct that’s only used to manufacture the product with lower costs (and keep in mind that at the same time, the product might not cost less for you) or do you want to consume an ethically manufactured product that hasn’t compensated to keep their production costs low? The decision is yours but it’s safe to say that there’s an unnecessary potential evil lurking in your favorite chocolate bar and its name is soy lecithin.

Important Reasons Why Parenting Starts Before the Child is Born

Healthy Eating Series: How to Live with Nut Allergies