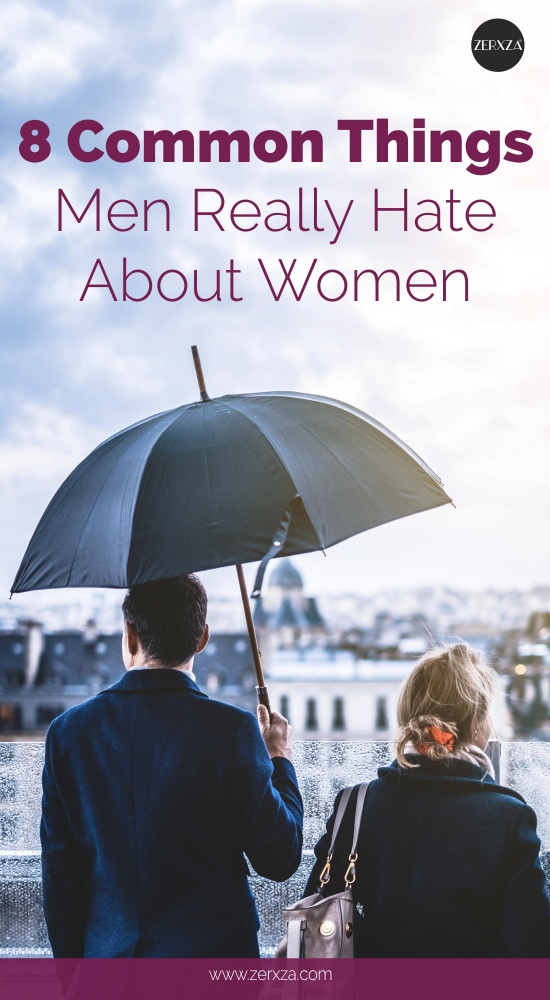 No one wants to admit their fault whenever relationships go sour, but whether we like it or not, it takes two to tango and sometimes, we women might unknowingly do things that just annoy men tremendously or even make them hate living with us.

The same goes for cheating. It isn’t either the man’s nor the woman’s fault that one party turns to cheating but nevertheless, certain tiny things might start throwing sore notes until one day, the relationship is driven to a point where it’s tough to come back from – or to the point where one half tries to find intimacy and love from somewhere else.

When you go down the following list, you might realize that you’ve done some of those things yourself too without even knowing. However, sometimes these are the exact things that make men hate living with women and being in the relationship up to the point where they decide to break it off.

1. Not paying attention to what he says

You might be wondering: isn’t it the other way around? Usually, men get the blame for not paying attention to their partners but actually, the blame is shared by both genders.

Many women get used to being the center of attention in the relationship but forget that a relationship is all about balance. When your partner is sharing something with you – news, an idea or anything else – pay attention and speak to him about it more closely. Don’t just nod and move your attention elsewhere or even worse – start speaking about you.

MORE FROM ZERXZA:  Where Exactly Is the "Thin Line" Between Love and Hate?

If you keep ignoring him, it might end with him finding someone else to speak to since he has realized he can’t share his ideas with you – simply because you don’t pay attention to him.

You’ve probably seen tens of Facebook or Instagram posts celebrating a relationship goal or praising how something a couple did is “such a cute couple goal”. This social media phenomenon has lead to a situation where many women keep comparing their own relationship with these social media “couple goal” posts and refer to these posts while spending time with their partner.

Let the relationship go in its direction and appreciate the things he does. Don’t compare your relationship to others – everyone’s different, just as relationships are.

3. Putting too much focus on your relationship in social media

Social media can be a great friend or your worst nightmare. As much as running after couple goals ruin your relationship, so does too much focus on social media in general.

Some women tend to live out their relationship virtually. Tagging their boyfriend everywhere, freaking out when he doesn’t hit the ‘like’ button as soon as you expected or doesn’t comment on every picture, forcing him to pay attention to you on social media – there are numerous ways you can ruin your relationship when you focus on how your relationship is doing online.

Focus more on real life, not social media – it’s as easy as that. Otherwise, you risk having that “single” status there sooner than imagined.

4. Trying to make him jealous

Ever tried making your boyfriend jealous by focusing on another man, hoping to get more attention from your boyfriend? While you might think it’s a good idea, it will actually result in the opposite – him seeing that the relationship is going nowhere.

MORE FROM ZERXZA:  What to Do If You Can't Stand Your Partner's Family

Men aren’t stupid – they see right through it when someone’s manipulating with them. Purposely making him jealous just drives him further from you.

Perhaps he has friends that seem “shady” to your or hobbies you don’t quite approve of? These feelings might lead to you throwing neurotic comments like “Is that really the whole story?”, “Where are you really going?”, “Is that a good idea?”

There’s nothing more annoying than someone constantly second-guessing in what you’re saying or doing. This kind of behavior just makes your partner think you don’t trust him. Let him be free and make his own decisions, just be sure you’re there to support him.

“My hair is such a mess”, “Ugh, I hate my skin”, “She gets on my nerves all the time”… Does that sound familiar?

While there’s nothing wrong with sharing your thoughts with your partner, sometimes these conversations turn into a whole myriad of complaints, either towards yourself or someone else. Sometimes, these comments might be even directed towards your partner – you might hint how his socks smell, how he should put the toilet seat back, how he needs to drive or anything else. You might think these comments mean nothing but to him these sound like constant painful blows.

Just keep in mind that even if it’s okay to share all of your thoughts with your partner, there’s a limit where your comments start sounding like constant nagging. He wants to spend time with you and talk to you, not get hit by complaints that make him feel as if you’re his teacher or mother, not his partner.

Many men fear one question: “How do I look?” They fear it mainly because of the possible dramatic reaction that might be followed, starting with exaggerative comments such as “Is that all you can say?” and ending with exclamations such as “I’m not going out!”. It all starts from small things and blows up in epic proportions.

MORE FROM ZERXZA:  Chemistry in Relationships: Does It Even Matter?

No man likes overly dramatic behavior, especially if it tends to be constant. It will just drive him towards someone who takes things more calmly and behaves more “chill”.

8. Letting him play the guessing-game all the time

You might think it’s cute to tell him to surprise you, but if he surprises you with something you don’t really like and you get offended or mad because of that, it’s an epic mistake that can hurt your partner’s confidence and drive him away from you.

Men want to know what you like – no matter if it’s about food, jewelry, clothes, sex or anything else. If they know exactly what you like, they can surprise you with things you’d definitely enjoy, instead of tolerating you being mad at them for a week because of a surprise-gone-wrong. Don’t try to play a “mystery woman” with your partner – there’s nothing sexy about it, instead, it becomes a sore point in the relationship.

Guys appreciate it if you’re straightforward and more importantly – you don’t play any games. Let the relationship move naturally and stay true to yourself.

How to Wear Clogs Without Looking Silly

Is Your Best Friend a Real-Life Mean Girl?

CONFESSION: “I am in a Sexless Marriage and I Wouldn’t Change a Thing” | Zerxza Reader Writes