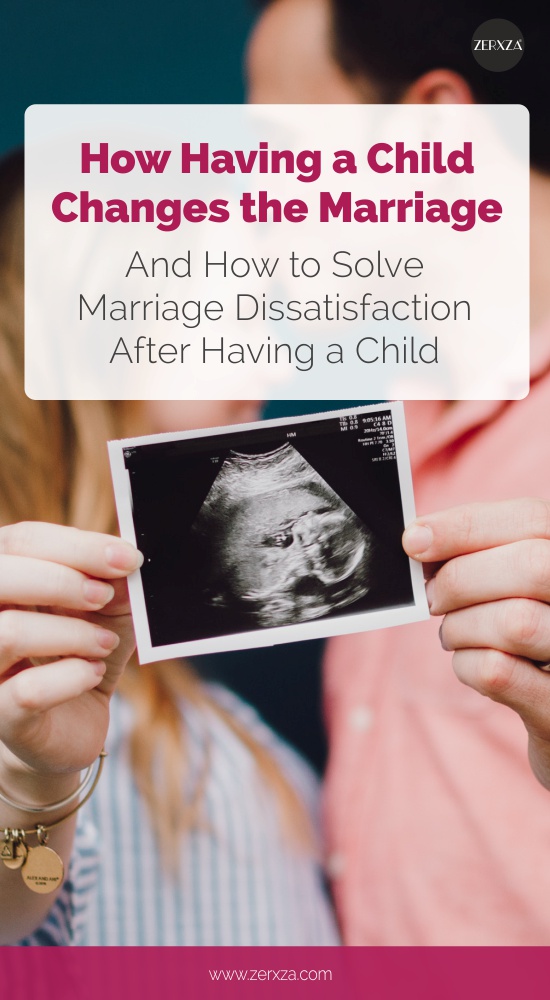 If you’re married with children, you already know that your relationship is different than it was before kids came along.

But if you and your partner haven’t opened the pandora’s box that is having a child, it’s probably a good idea to know what lies ahead. Kids change marriage. This isn’t always a bad thing, but sometimes it can really challenge your relationship. So, here’s what you need to know.

Carolyn Pape Cowan and her husband Philip Cowan, are both psychology professors at the University of California at Berkeley. And when they began having children, they noticed that their married started to take a hit. They began to address their own issues, and they also began an extensive research project called “Becoming a Family Project.”

“Becoming a Family Project” included longitudinal studies, tracking couples from when they were pregnant to when their children entered kindergarten.

After years of research, the conclusion was clear: marriage satisfaction declines after having a child. Plain and simple.

According to Carolyn Pape Cowan, “Ninety-two percent of [parents]…described a gradual increase in conflict after having their baby. By the time their babies were 18 months old, almost one of four copies indicated that their marriage was in distress. And this does not include the 13% who already had announced separations and divorces.”

In a nutshell, almost all parents experience relationship conflict after having a child. And nearly 25% of them go so far as to say their relationship is in distress.

This isn’t just a problem after the baby is born. In fact, as the child grows and develops, the couple’s relationship can continue to suffer as the dynamic of the family continues to shift and evolve.

These staggering statistics can look pretty grim, and make any woman not want to have kids. But remember, these statistics aren’t meant to scare you. Instead, it’s a wakeup call to the fact that having a child does change marriage.

When you know this ahead of time, your expectations will be more realistic and you won’t be crushed when you experience challenges in your own relationship. More importantly, you can take proactive steps to nip these problems in the bud so they don’t escalate and ruin your relationship.

Reasons for marriage dissatisfaction after you have a child

Here are some of the painful, yet real ways, couples start to struggle after kids.

Before children, you can enjoy an uninterrupted and child-free sex life. This means you can basically have sex whenever you want. There are no kids to take care of, to wake up for and to lose sleep over.

Now, that’s not to say that you can’t have sex after kids, or that your sex life will completely die. But it will definitely change. You will be busy, stressed and working with time constraints. So, it might be a lot more difficult to get in the mood or sex. And when you have the chance between sex and sleep, you’re going to opt for sleep.

It’d be easy to say, “Just make an effort to have sex.” But let’s face it, with kids, that’s kind of a slap in the face to parents who either don’t have much of a libido left or who truly can’t fit in the sex right now.

Instead, try to develop intimacy in other areas of your relationship- it doesn’t have to be just about the sex. What are the exclusive things you can do with and for each other that are special for just the two of you?

Couple time is harder to get

When there are no kids involved, you and your partner can give each other your full attention. This means flirty texts, lazy lie-ins, quality time together, uninterrupted attention, and just the energy to be there for each other.

Life coach, speaker, and author, Preston Smiles, made a point to take his wife on a date five days after she had their first baby. Why did he do this? Because he wanted to set the standard: he and his wife were still a couple and still on the same team.

You might not feel comfortable going out a date so quickly after birth, but – and this is a big but! – don’t be afraid of keeping your marriage-team strong.

And don’t worry. Your kids can totally handle it. In fact, seeing parents committed to each other is a beautiful thing for your child to witness and experience.

Your hormones are all over the map

During pregnancy and in the postpartum, a woman’s hormones fluctuate. This can lead to lots of emotional swings. Even after the child is older, the mother can still face a lot of stress. And when she’s consistently and chronically stressed, it can result in low levels of key sex hormones, making her libido low – at best.

This can be really hard for the husband to understand. After all, it’s difficult to understand what it feels like to have hormones out of balance when you’re not the one experiencing this chemical change.

First, take care of you. If you need help getting your hormones back on track, get that help. Secondly, communicate with your husband about how you’re feeling. This way, he knows it’s not personal. Finally, thank him for being there for you. Remember, this is hard for him, too.

Your husband starts to annoy you

If a woman’s hormones are imbalanced – and for many women, they are! – it can be difficult to feel intimate, appreciated and connected to your husband. Instead, he drives you crazy. Maybe it’s because he isn’t helping unless you ask him. Or, maybe he’s not taking on as much responsibility as you think he should.

Whatever the case may be, the following solution is key.

And another thing: spend time with your girlfriends. They can help you unload, vent and see things with a fresh perspective. Connecting with other women can raise your oxytocin and serotonin levels – two chemicals that make you feel good. And when you’re feeling better, you can return to your husband with more love and a lot less stress.

Yes, having a child changes marriage. And while this can often lead to distress and challenges, it can also be a way to grow in love, communication, and respect.

What Makes a Home “Luxurious”?

How to Cook Lamb Perfectly

How to Support and Improve Your Baby’s Sensory Development