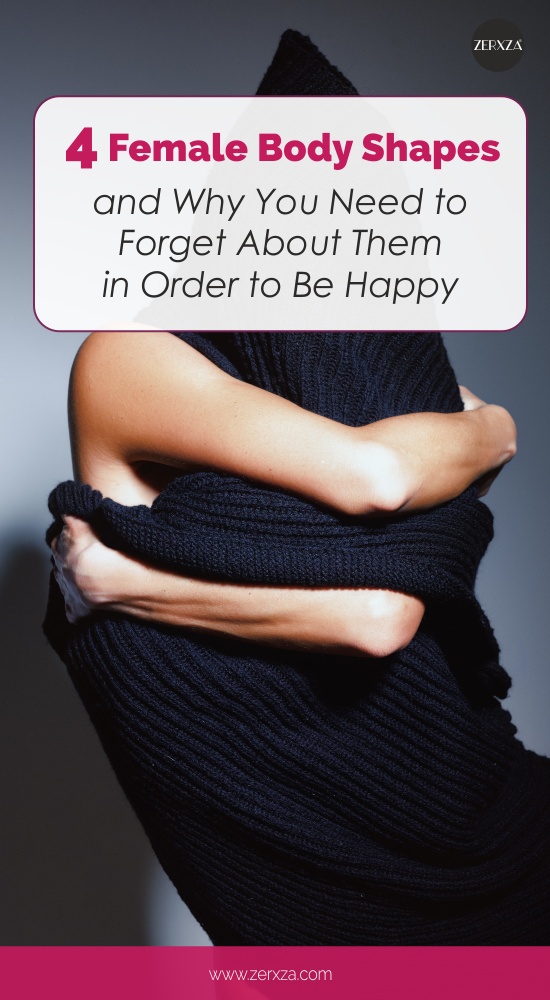 Ever since girls reach early puberty, there’s one thing they know: body shapes. The female body shape stereotyping is so common that most of us can answer the question “are you a pear or an apple?” with alarming ease.

And the rest of us try to either achieve a certain body shape or try to find out which body shape describes us.

Over time, there have been several body shape theories that categorize body types a bit differently. One of the most acknowledged theories that also keeps the body shape categories quite wide was created in the 1940s by an American psychologist William H. Sheldon. According to him, people fall under 3 somatotypes: ectomorphs, endomorphs, and mesomorphs.

He even went as far as to describe how these three somatotypes are related to specific personalities as well but naturally, this theory has received a lot of criticism over the years and has been even labeled as pseudoscience.

Most women, however, try to categorize themselves under a more commonly known body shape theory – the one that the fashion industry is based on.

The body shapes we all know today have been used predominantly in the fashion and textile industry but naturally, these theories lurked into everyone’s lives up to the point where women can’t stop comparing themselves to other body shapes and aspire towards the “perfect” body shape.

According to the most common body shape theory, there are 4 body shapes:

This is the so-called “epitome of feminine physic” – the body shape most women have wanted to achieve.

Though the hourglass body shape doesn’t need much of an introduction, the main theory is this: women with an hourglass figure have a narrow waist and their hips and bust are pretty much the same size.

MORE FROM ZERXZA:  Comfortable and Confident: How to Improve Your Smile

As the common female body shapes derive from geometric figures, the rectangular body shape is also pretty much self-explanatory. In this case, the waist is less than 9 inches smaller than hips and bust.

Or in other words – visually, there doesn’t appear to be a very significantly outlined waist, hence the “rectangularity”.

Inverted triangle body shape is considered to belong to athletic women. Women with inverted triangle shape have quite broad shoulders and narrow hips. In addition, their chest looks also wider while the legs are quite slim, so the visual appearance can be a bit similar to an upside-down triangle.

In a way, the spoon body shape is even more desirable than the hourglass figure. Women who are categorized under the “spoon” shape have a lot wider hips than the bust. To be more precise, the whole hip-region (including thighs and buttocks) are wider and fat also tends to find its home around that part of the body. At the same time, these women have small breasts and a narrower upper body.

While the term “spoon” is not so commonly known, this body shape is also called “pear” or regular “triangle”.

Clearly, neither these four or Sheldon’s theory describes all body shapes. Besides the aforementioned, shapes like “diamond” and “oval” are also sometimes included within the main body shapes. The oval body shape (also known as the “apple” shape) describes people who don’t have a well-defined waist and have slender legs and arms but “thicker” upper and lower body.

The issue with trying to find an ideal body shape

Infuriatingly, even an “ideal” body shape has been described in some theories, especially the ones used in the fashion industry as the basis for clothing manufacturing. The “ideal” is considered to be:

What makes this theory especially awful is, obviously, the stereotyping – trying to put all women into the same body shape. And even more awfully, that body shape tends to be nowhere near what an actual female body looks like.

A 2004-2005 study at the North Carolina State University found that out of 6000 women, almost half had a rectangular body shape and just 8% of them possessed an hourglass figure. About 20% of women belonged under the “spoon” category and a bit under 14% fell to the inverted triangle category.

Considering the result of that study, if all of the women without an hourglass figure would aspire towards that, it would mean that over 90% of women are most likely dissatisfied with their figure which is a clear cause for depression.

Numerous studies have proven over and over again what a devastating effect is created by negative body image. Unfortunately, that negative body image derives from the media’s obsession with “hourglass figure” or the “ideal body shape” which is still commonly used as the basis for manufacturing clothes.

What’s even more worrying is the fact that this negative body image is carried on to our children and teens who learn at a very young age that their bodies are not “perfect”. The 2017 Dove Global Girls Beauty and Confidence Report highlighted a sad fact: over half of the girls all around the globe don’t have high body esteem.

Body dissatisfaction runs deep and unfortunately, it’s largely created because of the stereotypical body shape categories that we all so desperately try to fit into. From numerous quizzes that try to figure out whether you’re an “apple or a pear” to even a bigger number of guides on how to dress according to your body shape, all try to put women into one certain box.

MORE FROM ZERXZA:  When Is It Okay to Consider Fashion as an Investment?

The problem with this trend? There are over 3 billion females on the planet. Can we really put hundreds of millions of women into the same body shape classification? Imagine trying to fit the same size of jeans onto 1 billion women. It’s simply not possible, so how can we even try to fathom the idea of trying to fit women under a few body shape categories? The worrying part of this trend is the massive dissatisfaction, depression, stress, and low self-esteem this categorization creates amongst women – and even amongst young girls.

All women are different and all bodies are different. While there are similarities and we might look great in similar clothes – and even in the same size of clothes – we will never look exactly the same.

And that’s a good thing! The world would be an awfully boring place if everyone would look exactly the same.

Some of us are tall, some of us are short, some have wider hips and some have wider shoulders. We shouldn’t try to fit inside narrow-minded boxes. No woman is better or worse for looking the way she does. She’s completely perfect the way she is – no matter the body shape. Appreciate the way you are and stop trying to fit yourself in an extremely tiny categorization because the fact is, no theory is correct nor false and no theory can ever categorize every single woman on the planet correctly since we’re all different. The theories will always remain that – just theories.

Let’s accept the differences and appreciate every female body, exactly the way it has been created.

The Lip Color Quick Guide: Tips to Get You Started the Right Way