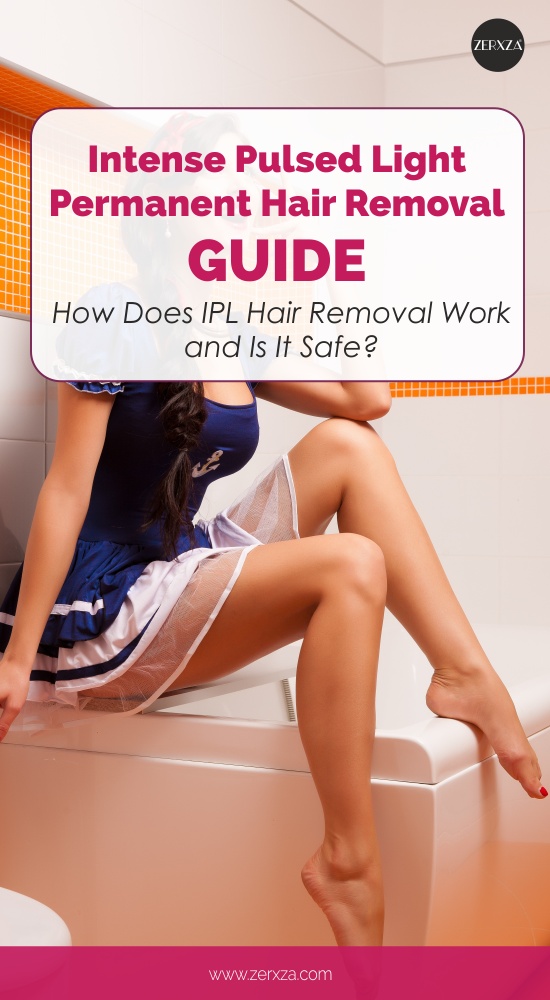 Body hair – the bane of every woman. For decades, women have tried to find better techniques for getting rid of annoying hair, but until now, these techniques have been either inefficient or extremely painful.

For that reason, most women have opted either for the methods that need to be used very often – such as shaving – or more long-lasting but painful methods such as waxing or epilating.

But what if there’s a hair removal method that combines the best of two worlds – long-lasting results with minimal pain? The good news is: there is and it’s called light-based hair removal.

Light-based hair removal utilizes a technology called intense pulsed light (IPL). This technology has been used in cosmetology and medicine for years as IPL has been deemed to be an efficient way to treat several conditions, including sun damage, skin pigmentation and much more.

During treatment, a flashgun-like device is used to emit light on the surface of the skin which travels through the skin with one purpose: to find melanin which is located in the vastest concentration in the root of the hair. The light will travel until it hits such a place. When it does, the light is absorbed and turned into heat which will essentially burn the hair-producing part, thus resulting in hair removal.

Since the light needs to be absorbed by the pigment, it doesn’t work that well with very light hair. The most effective result is seen by those who have light skin but dark hair. The darker the hair, the more effective the result is.

MORE FROM ZERXZA:  Evolution of Makeup: From Blood to Heavy Metals and Carcinogens

Why is that so? The explanation is actually quite simple. The thing is, not all hair is active all the time. IPL treatment will target only the hair that’s currently active.

Usually, it will take about 8 to 10 treatments to get rid of most visible hair and these treatments should be about 4 to 6 weeks apart. Mostly, hair reduction of 60-80% can be expected.

IPL vs lasers: what’s the difference?

Laser hair removal and IPL are very similar, even so much that many clinics and spas confuse these two. In their essence, both technologies utilize light energy.

Laser hair removal devices use just one very strongly concentrated wavelength of light which tries to target one specific pigment. IPL devices, however, use a wider spectrum of wavelengths and thus, the light isn’t so intense. For that reason, IPL technology isn’t so prone to burning the skin while regular laser hair removal is notorious for that.

Laser hair removal emits stronger light that penetrates deeper than IPL, so it’s also entirely possible for IPL to miss a few more hairs than the laser method would. But on the upside, as mentioned – you’ll be less likely to burn yourself.

When it comes to the effectiveness of hair removal, both methods are fairly similar and will require a similar amount of treatments too, though IPL is said to require a few extra sessions.

Are lasers and intense pulsed light treatments safe or will they give you cancer?

Since we’re dealing with lasers, light and a bit of sci-fi kind of devices in these treatments, there’s one horrific myth circling around: people are afraid that light-based hair treatments will cause cancer.

MORE FROM ZERXZA:  The Lip Color Quick Guide: Tips to Get You Started the Right Way

One extensive 2017 study focused on that myth and found that to be nowhere near the truth. According to the study, being repeatedly exposed to intense pulsed light will not increase cancer risk since a typical wavelength that’s used in IPL devices is not capable of doing any photochemical reactions with melanomas. Melanomas would simply absorb that wavelength and turn it into heat but in no way would the light contribute to the melanoma’s growth. As the study said, the melanoma would develop as it would have done even without the IPL treatment.

The biggest risk of using intense pulsed light devices is burning yourself and causing some issues due to a severe burn (which might happen, for example, should the device malfunction). During normal use, you wouldn’t burn yourself to such extent to actually consider it an injury.

However, photo epilation will create a kind of sunburn-like sensation where your skin is reddish and sensitive (and might be also peeling). Experts recommend staying away from direct sun exposure at least 4 weeks before and after the treatments.

As with every procedure, there are some other side effects to note. These are noted to be the most common side effects of intense pulsed light treatments (according to this study):

Most likely you can expect your skin to be red and you might look like you have a sunburn, but other than that, you’re not likely to experience any serious side effects. And most importantly – you don’t have to worry about cancer.

One of the biggest perks of IPL technology is its relatively low pain level in comparison to other hair removal methods. It’s definitely not completely pain-free, but as DermNet NZ has explained: “The sensation has been likened to a light pinch or the snap of a rubber band.”

MORE FROM ZERXZA:  Magnetic Eyelashes: What Are They & How Do They Work

All people have different pain tolerance levels though and of course, some skin areas are more sensitive but at the most part, IPL is times and times less painful than good old epilating.

The best part is, you don’t need to go to a salon anymore to give your skin an IPL treatment. With devices such as Braun’s Silk-expert or DEESS hair removal system, you can get the same salon-treatment at home. While the initial cost of the device seems hefty, it’s nothing compared to the cost of going to multiple treatments. Plus, you can remove your body hair from the comfort of your home.

Safe, efficient and almost pain-free: IPL technology is a blessing for every woman.

Soy Lecithin: The Devil in Your Chocolate

Is the First Year of Marriage Really That Big of a Deal?

Christmas Gift Ideas: 8 Budget-Friendly Makeup Brush Sets to Get for Your Best Friend

Your Beauty Products May Be Killing You Silently

What You Can Do to Be More Attractive Without Wearing Makeup