5 Easy Ways to Make Your Apartment Feel Like Home

Is Working from Home Actually Just a Passing Trend?

Oatly, a Swedish company producing dairy alternatives, is no stranger to most of us. After having been backed by Oprah, Natalie Portman, and Jay-Z, Oatly is not just vastly popular. The reigning king of plant-based drinks is so notorious that oat milk is now called the next cash cow. Oat milk is the it-thing of the 2020s but Oatly who started already in 1994 is lightyears ahead of newer competitors.

Oat milk has become such a popular dairy alternative mainly due to the recent growing trend of health-consciousness. Consumers simply feel they’re making a better choice for their body if they swap out or reduce their dairy consumption for oat-based drinks. The fear of high-fat content in regular dairy products is also one of the convincing reasons why some decide to opt for Oatly.

While Oatly does indeed put a great emphasis on organic ingredients and clean-label manufacturing, there are still some concerns that might put a dent in Oatly’s otherwise great image. One such dent revolves around commonly used food additives phosphates.

Calcium phosphates are often used in dairy alternatives as a way to improve the product's nutritional profile. This is especially important for vegans whose calcium intake is low as it is. Oatly, similarly to many other manufacturers, uses additives such as phosphates to relieve that problem.

Both calcium phosphate and di-potassium phosphate that are used by Oatly are approved for use in the US by the FDA. That alone doesn’t make phosphates completely safe though.

One study looked into the issue of phosphate toxicity and unfortunately, the conclusions weren’t too optimistic. According to the study, processed foods with phosphate-containing food additives can significantly increase phosphorus intake and impair the normal homeostatic balance of calcium and phosphate. Another study found that soft drinks with phosphoric acid had a connection to hypocalcemia in postmenopausal women.

While it’s true that developing toxicity usually requires a bigger phosphate intake, it’s still troublesome to consume food additives that have even a slight chance of harming your body. Using artificial additives can disrupt your body’s natural balance, especially if you’re consuming such items on a regular basis and in larger quantities.

Oatly’s product lineup uses phosphates quite heavily, but the good news is that the Organic Oat Drink is, indeed, completely pure, containing no additives. With all other products, you do need to tread cautiously. 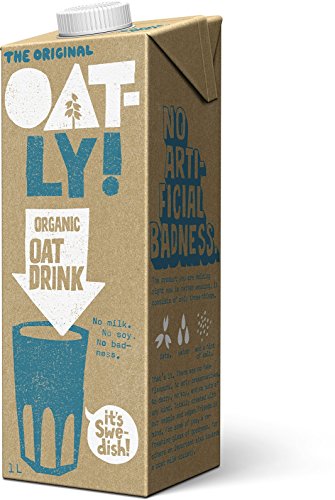 „As with all of our ingredients, we note our addition of phosphates in the list of ingredients and declare the phosphorus content on our nutrition labels. We know that consumers are incredibly smart; by making this information readily available, any consumer – including those recommended to limit their intake of phosphorous –  can determine how Oatly can fit into their diet. While we haven’t done long-term studies on Oatly’s effect on human health, Oatly should be consumed as part of someone’s entire diet, and its nutritional content considered as part of everything else someone is eating and drinking,“ said Sara Fletcher, Oatly’s communications and public affairs lead to Zerxza.com.

According to Fletcher, the decision to use phosphates derives from their goal to only use ingredients that fill a nutritional or functional role and phosphates perform both of those for them.

Considering the potential danger of additives or over-consuming phosphates though, it’s recommended for consumers to keep an eye on their overall additive intake.

The dark side of investors: is Oatly’s big success going to be the biggest downfall too?

Oatly has always come across as a down-to-earth sustainable company that truly doesn’t care about greedy corporative manipulations. They’ve even said they are not interested in being a gigantic food corporation with some people deciding everything for them. At the same time, they’re having massive investment rounds which make some consumers worried: can they truly trust Oatly’s claims?

„We’re very careful in choosing our partners as it’s important for us that they come on board believing in our mission and wanting to support that, rather than just being around for a quick return on investment. But it’s also important for us to be able to show the financial world that investing in sustainable companies is good business. In order to create real change, we strongly believe that global capital needs to shift toward more green, sustainable investments like in Oatly,“ said Fletcher, ensuring that sustainability is their core value which they’ll never compromise.

„Our investors are well aware that these values have directly contributed to our company’s success to date and they understand they won’t be changing,“ explained Fletcher further.

Activists have also recently expressed their concerns as Oatly has become related to Blackstone. Blackstone has received some public backlash as they've been linked to a Brazilian company that supposedly has contributed to the Amazon rainforest's deforestation. Oatly, however, said that in their eyes, it's better to see capital moving towards sustainability, so shutting out such companies is not really the right way to go.

The bottom line is, there's no one answer. When opting for Oatly, be vary of the phosphates. Artificial additives are never a good choice and if you want to eat clean, it's better to avoid additives altogether. Oatly, luckily, does have additive-free products as well, as the aforementioned organic oat drink.

Dairy alternatives can taste great and make you feel better, but as with any product, keep your consumption moderate. Oatly might be a good choice but only if you keep in mind the troubles phosphates could potentially cause and opt for the cleanest drink possible.

Wintertime is a real hazard on your skin. Cold wind and harsh temperatures do a number on you, starting from redness and ending with...